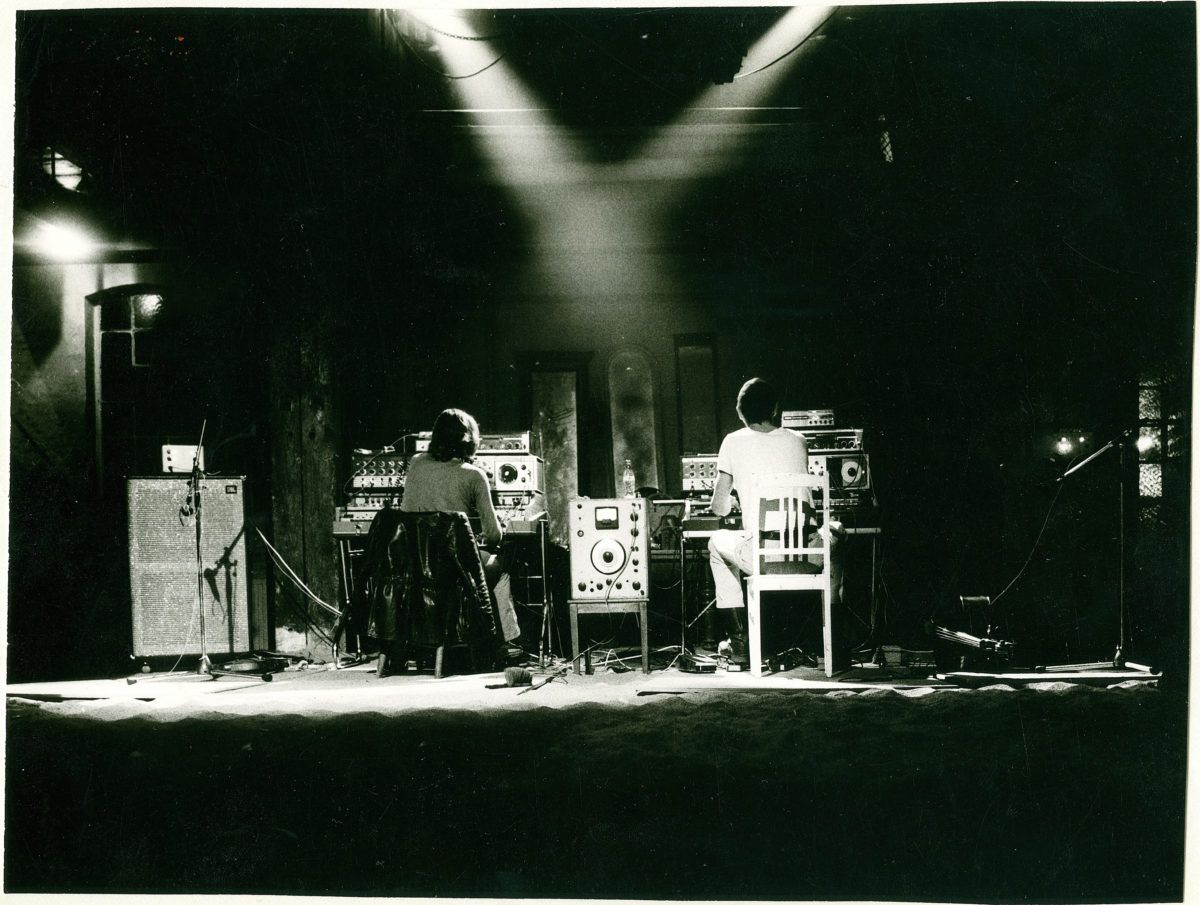 The Many Permutations of Moebius & Roedelius 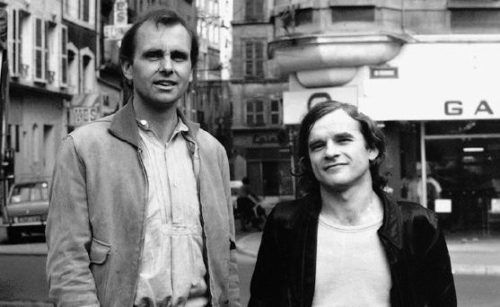 A couple weeks ago on the blog, I talked about the multimedia collective Intersystems, based in Canada in the late 1960s. As discussed then, electronic and avant-garde-based rock in North America during that time period was not as flourishing as it was in Europe, especially in Germany. West Germany was the epicenter for innovations in electronic and rock sounds in the 1970s. Two of perhaps the most influential and omnipresent figures in German krautrock and kosmische (cosmic) music were Dieter Moebius and Hans-Joachim Roedelius, whose collaborations manifested three highly essential bands: Kluster, Cluster, and Harmonia, along with their various solo projects and other collaborations. Furthermore, Moebius and Roedelius’ work with Brian Eno helped develop the genre of ambient music, having an influence far beyond Europe and way past the 1970s.

In 1968, Hans-Joachim Roedelius co-founded the Zodiak Free Arts Lab in West Berlin with Conrad Schnitzler. The Zodiak was an experimental hotspot for German musicians of the day, bringing in legendary artists such as Tangerine Dream, Can, Neu!, Ash Ra Tempel, and monumentally in 1969, Dieter Moebius. Schnitzler met Moebius at a restaurant where he was working as a cook, bringing him into the fold of the Berlin artistic underground. Roedelius and Moebius found they had similar artistic interests, and joined forces with Conrad Schnitzler to form Kluster in 1970.

For those more familiar with Cluster or Harmonia, Kluster leaned more towards the avant-garde and improvisatory than those later groups. Amongst more traditional instruments such as organ, violin, cello, piano, and percussion, the trio used odd instruments to create their sound, such as kitchen tools and alarm clocks, and did not rely on traditional concepts of melody and song structure. After playing live across Germany, their opportunity to record occurred when Schnitzler found a newspaper ad placed by a church organist looking for musicians to make new church music. With sponsorship from the church, the first two Kluster records, Klopfzeichen and Zwei-Osterei, were born. Each had religious text on the first sides of the records as per the request of the church. The music was dark, heavy, and a progenitor of industrial music. Kluster went on to record one more album together in 1971, the equally strong Eruption, before disbanding upon the departure of Schnitzler.

However, Kluster didn’t fully disband. Instead, the pair changed the name slightly to Cluster and went forth with a new creative vision with the addition of composer and producer Conny Plank. With Moebius and Roedelius playing instruments and Plank providing effects and compositional input, Cluster began developing a more electronic and atmospheric sound compared to the Kluster output. Their first two records, Cluster ‘71 and Cluster II, are more driven by motifs than melodies, creating musical environments that spread out and burble over ten, fifteen, twenty minutes. Cluster ‘71 and Cluster II make it clear how the band contributed to the kosmische sound in Germany during the 1970s, their floating, ethereal, and other-worldly sounds evocative of cosmic and space themes. By the time Cluster II came around (with Moebius and Roedelius at the helm as a duo now), the instrumentation was widespread and eclectic, including analog synthesizers, organs, bass, electronically-modified cello, Hawaiian guitar, and audio-generators.

Their third album, Zuckerzeit, tied Cluster more firmly to the standard motorik, or repetitive and cyclical style, of their krautrock contemporaries. This shift was brought about by collaborating with Neu! guitarist Michael Rother. Neu! was an integral group in developing the motorik sound, and Rother brought that influence with him into his work with Cluster. Just compare the first track of Zuckerzeit, “Hollywood,” and Neu ‘75’s opening track “Isi.” While instrumentation may be different, giving each band their own sonic imprint, that perpetual motion of motorik style is very apparent.

Zuckerzeit was recorded at a studio in rural Forst which Moebius and Roedelius built together. This studio and the recording of Zuckerzeit laid the groundwork for the formation of a new band, Harmonia, composed of Moebius, Roedelius, and Rother. Like Zuckerzeit, Harmonia’s sound brought together elements of Cluster’s and Rother’s style. Their first record, released in 1974, Musik von Harmonia, combined Cluster’s odd electronic atmospheres with the insistent rhythmic pulse and song structure of Neu!. The results were marvelous, prime examples of German electronic innovations of the decade, both kosmische and motorik, amorphous electronics, strict structures, and wandering melodies. Their second record released the following year, Deluxe, expanded on these elements further, relying more heavily on melody than their other works.

Harmonia also brought another crucial figure into the mix in 1976: Brian Eno. At this point in the mid-seventies, Eno was at the very beginnings of his ambient journey, his first solo ambient record Discreet Music released the previous year and his seminal Ambient 1: Music for Airports to come in a couple years. Eno was brought to the Forst studio to help Harmonia record their third album, which never came to be. Harmonia ran its course and disbanded before the album could come to fruition. However, the eleven-day sessions with Eno were eventually released in 1997 as Tracks and Traces, a gorgeous document of some of the first collaborations amongst Roedelius, Moebius, and Eno. Eno’s influence was still prevalent in Cluster’s fourth album after the dissolution of Harmonia, Sowiesoso. The record was a bit more reserved, reflecting Eno’s ambient style. In 1977, Eno would return to work with Cluster again, releasing the essential Cluster & Eno. The album expanded the band’s audience and brought together both artists’ strengths, producing a series of peaceful, intriguing pieces that amble in an propulsive way, echoing of Cluster, Eno, and Harmonia all at once. Eno, Moebius, and Roedelius would release another record together, After the Heat in 1978, further solidifying their sound and adding more oddball aspects, such as “Tzima N’arki,” which had backwards recorded vocals by Eno.

After Cluster’s work with Eno, the duo went on to release two more albums before a hiatus, Grosses Wasser and Curiosum. Throughout the 1980s, Moebius and Roedelius pursued various other collaborations and solo work before reconvening in the late 1980s as Cluster, releasing three more studio albums over the next two decades. Moebius passed away in 2015, and while Roedelius is still an active musician, the pair as we know them is completed.

The many permutations of Roedelius and Moebius’ work over the years evolved and morphed to reflect where they were at and who they were with as they made music: Kluster bringing their avant-garde mindset to the fore, Cluster with Rother, as well as Harmonia drawing upon more electronics and motorik structures, and Cluster with Eno settling into peaceful, ambient works. However, despite their chameleon-like abilities, Moebius and Roedelius’ music together always had a distinctive sound of abstract melodies, sweeping sonic landscapes, and clever instrument choices. Traces of Cluster can be heard in artists from David Bowie to Stereolab, but only Moebius and Roedelius could create the unique sound that they contributed to the fabric of German musical history.

We consistently keep many records by Moebius, Roedelius, Cluster, Harmonia, and their various collaborators in stock here at the shop. Take a look at what we have currently, and always check to the art rock/krautrock/prog/psych section to see what new items arrive!

Also check out the September issue of The Wire, which has Neu! as their cover story!