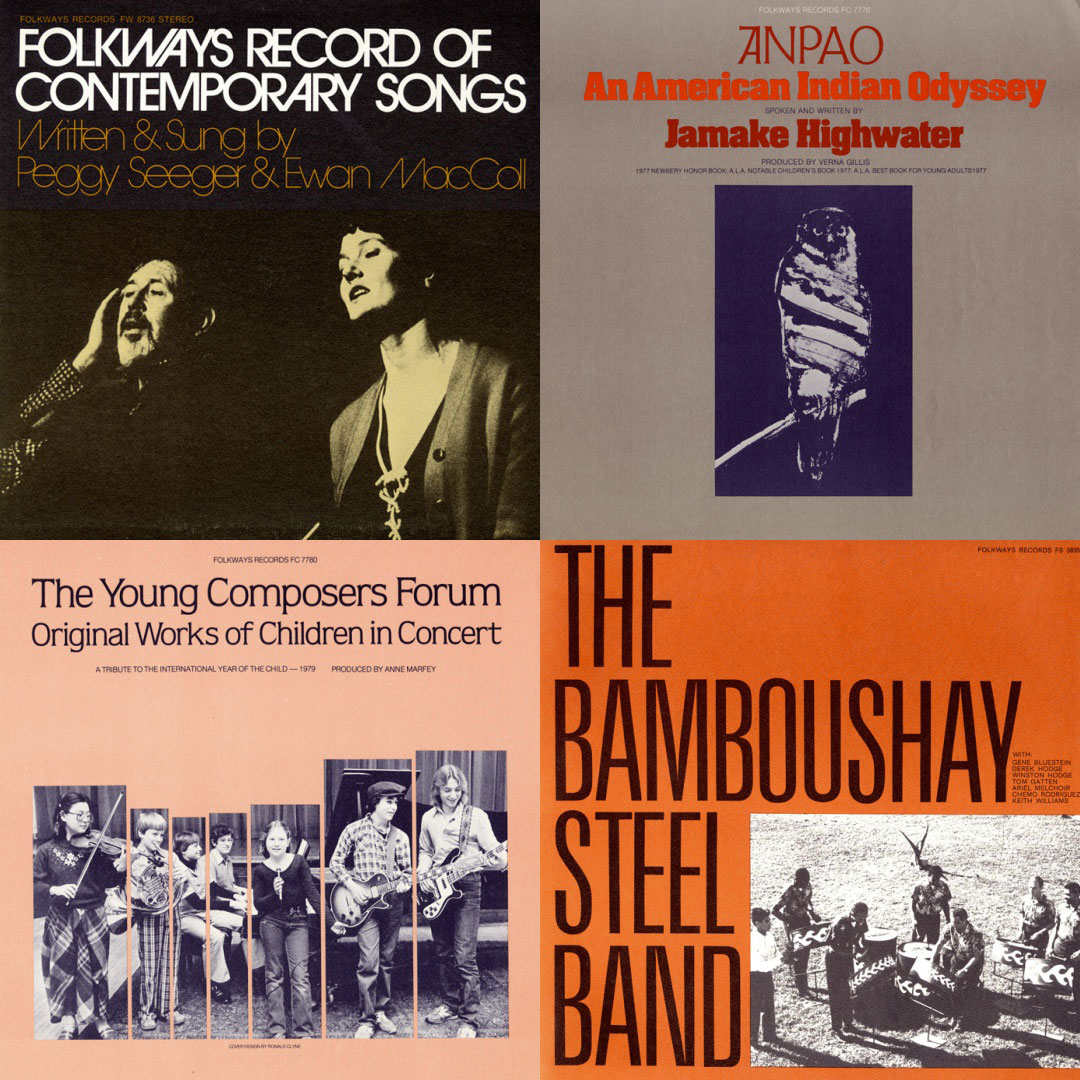 Between the folk music of North America and international sections of our shop, we have a section dedicated to Folkways Records, a historically and culturally significant record label. 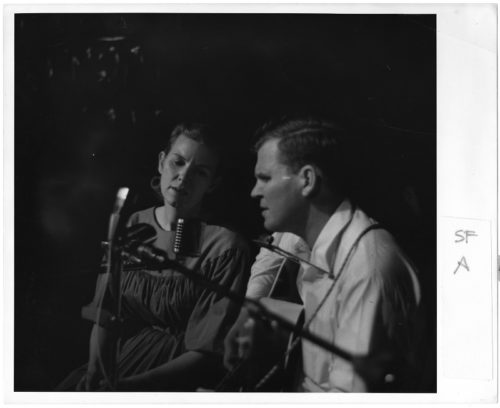 Smithsonian Folkways Recordings is the non-profit record label of the Smithsonian Institution, the national museum of the United States. Formerly known as Folkways Records, the label was founded by Moses Asch and Marian Distler in 1948, with the goal to “record and document the entire world of sound.” Between 1948 to 1986, Folkways released 2,168 records, focused on traditional and contemporary music, spoken word, poetry, instructional recordings, and documentary recordings. Folkways was one of the first record labels to release music performed from many locations around the world. Furthermore, the label was integral to the American folk music revival, with performers like Lead Belly, Woody Guthrie, and Pete Seeger releasing records on the label.

The Smithsonian acquired Folkways Records in 1987 after Asch’s death. One of the contingencies of the acquisition was that the Smithsonian must keep the Folkways titles in print forever. Any Folkways album can still be purchased at least on CD and/or as a download. The label’s purpose today is to put out audio recordings and educational materials, and is part of the broader Smithsonian Center for Folklife and Cultural Heritage.

The website for Smithsonian Folkways Recordings is an incredible resource. They have articles, podcasts, videos, and playlists to explore, as well as Folkways Magazine, where you can read the current issue as well as back issues. There are also a variety of educational materials that you can use for self-teaching or classroom settings. Each Folkways record has a page on the site with a summary of the record’s contents, track samples, and a free download of the liner notes for the record.

Below are three of the store’s favorite Folkways recordings that we currently have in stock, or had in the past.

British Traditional Ballads in the Southern Mountains captures one of the most iconic voices of Appalachia, Jean Ritchie. One of fifteen records Ritchie recorded for Folkways Records, British Traditional Ballads features primarily Ritchie singing solo, occasionally accompanying herself on dulcimer. Ritchie helped popularize the dulcimer through her recordings, and some of her Folkways recordings help the listener learn to play the dulcimer.

Born in 1922, Jean Ritchie grew up in Viper, Kentucky. Her family loved music, and Ritchie and her father would actively seek out new folk songs to learn and sing. Ritchie later got a BA in social work and taught elementary school in New York City. It was while there she met major figures in the American folk music revival, such as Woody Guthrie, Pete Seeger, Joan Baez, and Bob Dylan. From there, she traveled to Ireland and Scotland on a Fulbright scholarship to conduct research on folk music, which eventually she published.

Ritchie’s impact on folk music through both performing and scholarship is vastly significant and beautifully captured via Folkways recordings. We currently have an LP copy of British Traditional Ballads in the Southern Mountains, Volume 1 available for purchase online or in-store!

Maria Sabína, Mushroom Ceremony of the Mazatec Indians of Mexico 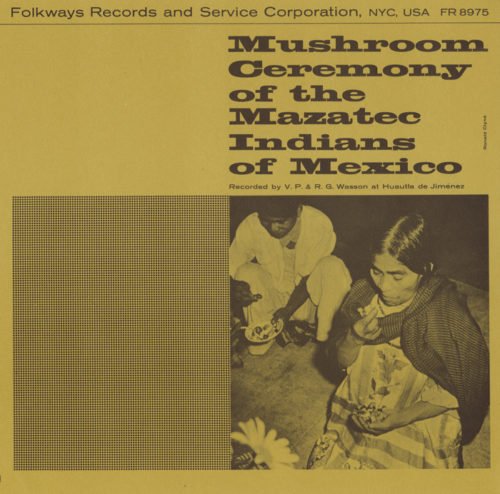 Maria Sabína was a Mazatec curandera, or healer, living in Huautla de Jiménez, Mexico during the twentieth century. Her sacred healing ceremonies, called veladas, used psilocybin mushrooms. Each ritual participant would take the mushrooms in order to “open the gates of the mind,” and commune with the sacred. One of these ceremonies is documented on Folkways’ Mushroom Ceremony of the Mazatec Indians of Mexico, recorded in 1956.

Sabína was one of the first modern curanderas to allow Westerners to participate in the velada, however the influx of Westerners into the Mazatec community caught the attention of the police, who suspected Sabína of dealing drugs. This ultimately negatively affected the Mazatec community and almost caused the ritual to be banned. Despite initial ostracization of Sabína after these events, she is now viewed as a sacred individual in Huautla.

While we do not currently have Mushroom Ceremony of the Mazatec Indians of Mexico in stock, we recommend purchasing a CD copy or downloads from the Smithsonian Folkways site.

Opening track of Mushroom Ceremony of the Mazatec Indians of Mexico 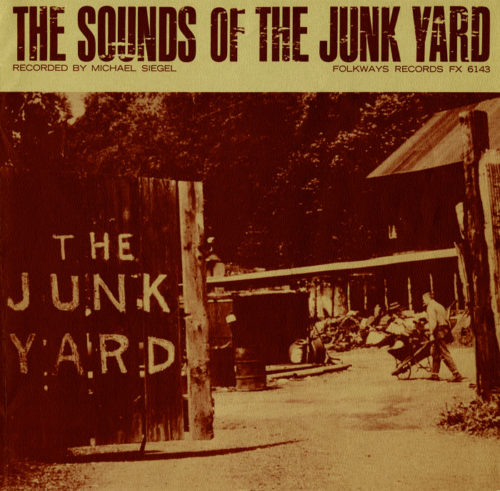 Sounds of the Junk Yard was recorded in 1964 by Michael Siegel, documenting the typical sounds one could hear at a junkyard in Warren, Pennsylvania. As Siegel wrote in the liner notes, “There are many strange sounds in junk yards, depending on the specialization of the yard, the equipment, and the uses to which the equipment may be put.” Siegel provided detailed information about which equipment was being recorded and how it was being used during the recording. The listener can experience the sounds of an acetylene torch, loading a truck, and a magnetic crane, among many others.

Not only does Siegel create a soundscape of a particular time and place, the sounds captured are prophetic of industrial and noise records to come. Sounds of the Junk Yard establishes how noise and industrial are very much embedded into the folk landscape of the United States.

Although a copy of Sounds of the Junk Yard has come and gone at Torn Light, we also encourage buying a CD or download from the Smithsonian Folkways website.

“Baling” on Sounds of the Junk Yard

If you are curious for more information about these records or any other Folkways releases, visit their site for a wealth of resources, including PDFs of each record’s liner notes. Below is a list of which Folkways recordings we currently have in stock, available for purchase online or in-store.

Currently In Stock from Folkways Records

Krautrock: Germany’s Post-War Sound from the Cosmic to the Minimal