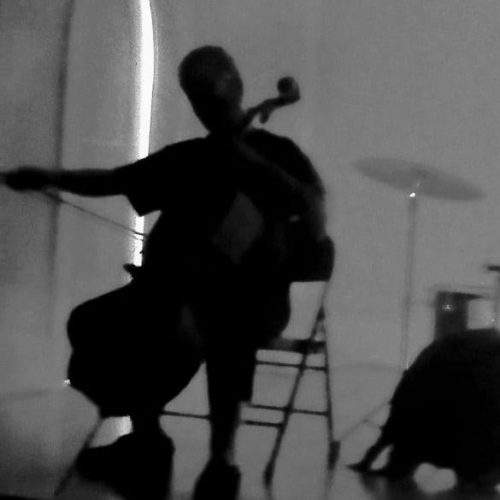 Solar Hex, the project of Virginia-based cellist Kaily Moon Schenker, released their new record, Tired Eyes, on ARKEEN this past Friday. Tired Eyes is a stunning album that foregrounds the cello’s versatility. Improvising with dissonance, harmonics, drones, and a variety of tone colors, Schenker creates an atmosphere on Tired Eyes that washes over you, making the rest of the world fade into the background. I had the pleasure of corresponding with Schenker via email to discuss her journey with the cello, the creation of Tired Eyes, and her thoughts on the cello in contemporary composition.

Schenker’s experiences with the cello are nearly lifelong. “I’ve been a cellist for so long, that I don’t even remember what it’s like to not be one,” she said. Schenker has been playing for about twenty-two and a half years, starting to learn at age four. Her friend’s mom was a cello teacher, so many of her friends took cello lessons growing up, to the point where Schenker “thought it was something everyone did.” In high school, Schenker had the opportunity to study with renowned Russian cellist and composer, Tanya Anisimova, who is known for her live cello improvisations with vocalizations. Schenker said that Anisimova “is the first person who truly pushed me to improvise, and planted the idea in my mind.”

Performing mostly classical music until her senior year at the University of Illinois, where she earned a bachelor’s degree in classical music performance, Schenker’s first experiences with improvising began when she collaborated with Nick Keeling to release Marker in 2018. She shared her memories working with Keeling, who was her neighbor at the time: 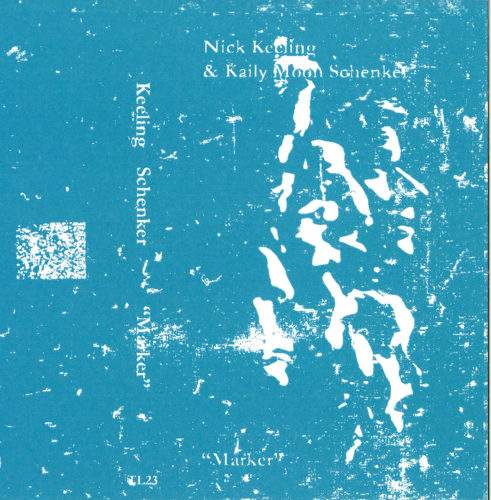 “Nick was my neighbor during my senior year of college at University of Illinois. We lived in this really funky 1900s brick apartment building called the Elm, and ended up getting to know each other because we were interested in a lot of the same music, and records in general. Working with Nick was the first time I ever improvised collaboratively, and it was a really refreshing and positive experience. We go to record in a really neat home studio, and the whole process was so relaxed that I was able to enjoy the creative process a lot more than I was used to. I’d also never seen anyone build a tape delay system from scratch, which was very eye opening. These recordings are what became the Marker album, and each of those tracks were pretty much recorded spontaneously in a single afternoon. We also got to go on tour in early 2018 which was a super cool experience!”

Now re-pressed, Marker is an incredible document of Schenker’s and Keeling’s artistry. As Brandon Hill describes them: “Two artists that continually strive for the most sincere, deepest explorations of sound and human expression.”

Upon moving home to Virginia, Schenker found an experimental music community there and began exploring the cello’s qualities even more. She stated, “I was lucky enough to be taken under the wing of a really vital community of experimental and folk musicians, which was hugely inspiring, and opened my eyes to all sorts of new possibilities including that of the cello as a source of different drones. This very much felt like a second period of learning how to play the cello, as I started exploring new textural elements, double stops, and quarter tones. I also began to truly fall in love with the cello’s timbral similarities to the voice, and massive range of pitch, as well as my own ability to trust my ears and my own musical instincts.” 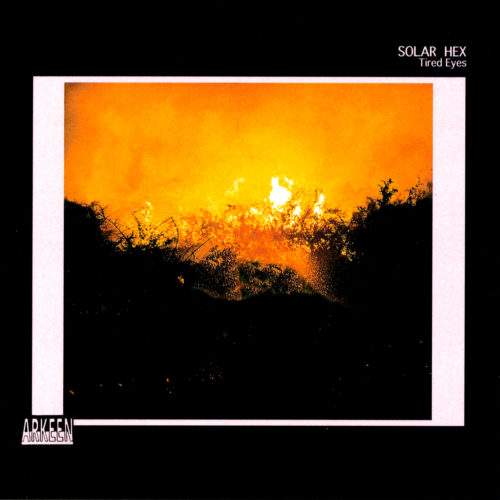 Many of these techniques appear on Tired Eyes, which was created mostly through improvisation. When improvising, Schenker likes to base each track on a different technique, drawing from what she calls a “toolbox of different tone colors and ideas.” She also will create pieces around specific musical intervals, especially augmented seconds (there is a sound file in that article which demonstrates an augmented second). Many of the colors and effects Schenker produces are made through variations in how fast she moves the cello bow and how hard she places the bow against the instrument’s strings. As she wrote, “A lot of the extended and more textural techniques I use are things that I’ve figured out on my own just from spending time messing around with bow speed and pressure. I love trying to make sounds that are deliberately harsh or unpleasant, and spend a lot of time just trying to get new sounds out of my cello. I’m also not a big fan of effects pedals etc because I think they hide the natural sound of the instrument.” 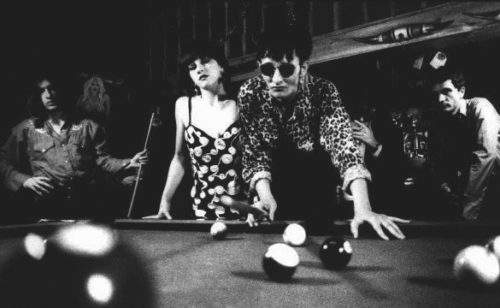 Schenker’s musical lexicon comes from a variety of influences, perhaps most significantly the guitarist Rowland S. Howard, known for his work with the post-punk band The Birthday Party and his solo career, which Schenker finds was “overlooked while he was still alive.” Schenker said, “I’m obsessed with his playing because he never does anything extra, or musically wasteful. Also unlike a lot of guitarists, his work is very focused on tone color and contour rather than melody or virtuosity. When he plays it makes a beautiful shape in a way that almost feels tactile. My solo improvisations were pretty much a direct response to hearing his playing, and understanding that I might actually have something to say as an artist, after years of playing the musical texts of others.” Even Schenker’s artist name, Solar Hex, is inspired by Rowland S. Howard’s collaboration with Lydia Lunch, a song title on their album together. “I just thought it sounded cool and witchy, and I’m also a Leo, so I liked the solar part haha,” Schenker said.

When it comes to inspiration for the title and concept behind Tired Eyes, Schenker shared how “Tired Eyes” comes from a song by Epic Soundtracks. “He’s one of my favorite songwriters, and actually one of my biggest influences, but in a more indirect way than the musicians I’ve mentioned above. I love the way that he’s very plain spoken in his songwriting, and his work feels straight from the heart. More than anything, the title was [a] shoutout, because I’d been listening to a lot of his work…at the time that I recorded it.”

At the time of recording, Schenker had not considered an overall theme to the record. However, Schenker notes the events in her life surrounding the album’s creation. She recalls, “I think in retrospect, while there was no intentional overarching theme, at the time that all of these pieces were recording, I was recovering from an unexplained post-viral illness, and a pinched nerve in my spine, and as a result, having to seriously re-evaluate what I wanted to be doing with my life and my music, and a lot of that made its way in there unintentionally.”

The final track on Tired Eyes, “The Red Cello” features a remix by Apaixonar, a project of Brandon Hill’s, which he described on Instagram as “a calming, wonderful project to work on in late 2020 / early 2021 during rather tumultuous winter times.” This remix shows an example of the various ways the cello can be explored in contemporary composition. As well as keeping up with what her friends are releasing, Schenker is excited about the work of ECM Records cellist Anja Lechner, whose improvisations are inspired by folk music.

When considering the place that cello has held in contemporary composition in the past, as well as its future, Schenker holds critiques and hopes. She states, “Overall, I guess I’m always a little disappointed with the trend of famous classical musicians doing so called ‘crossover’ work, which is usually pretty banal, and often is just covers of other people’s work. Also, the perception of the cello as an instrument that always sounds ‘pretty’ can get old at times. I also think there’s a great tradition of works for solo cello which can be traced all the way back to the Bach cello suites, and I hope that continues!”

As for Solar Hex, the future is wide open with possibilities, like the expansiveness of their cello sound. They share, “I’m not totally sure what the future holds. I’m just about to start gigging again after a two year break and I’m also about to do some recording with my friend Mike Gangloff, which I’m really excited about. I’d love to tour again, though that’s going to have to wait until I learn how to drive on the interstate. As of right now, I’m really just trying to stay in the moment and enjoy things while they’re happening!”

Let’s join Solar Hex in enjoying this moment, basking in the awe which Tired Eyes brings. Tired Eyes is available for purchase now, as well as the repress of Schenker and Keeling’s Marker. Solar Hex also noted via their Instagram that their record Cut Across the Crop Circles is also available via Bandcamp, writing, “Back in October, I released a short album, Cut Across the Crop Circles on Bandcamp. It was heavily influenced by the 1.5 years of COVID times spent living in the 150 year old brick shed I currently call my home.” Also make sure to explore ARKEEN’s catalog so far, with releases by Ted Byrnes, Josh Landes, and Alex Cunningham.

A huge thanks to Kaily Moon Schenker for speaking with me.