“When you play the theremin, it looks kind of magical. Maybe even as if you could cast spells.”

Contemporary thereminist Carolina Eyck spoke of the instrument fondly to Smithsonian Magazine in a one-hundred-year celebration of the theremin’s invention a couple years ago. What about the theremin makes it so magical? Perhaps that it is the only instrument played without contact with the instrument? That the music truly seems to appear from thin air? Its distinctive sound that resembles a violin or cello, but is still slightly otherworldly? All of these aspects of the theremin make it one of the most uncanny electronic instruments ever invented, but also one of the most beautiful. The possibilities are endless with a theremin, an instrument controlled by manipulating the electromagnetic field between two antennas. Moving the hand up and down near a vertical antenna raises and lowers pitch, and movement over a looped antenna with the other hand controls volume. 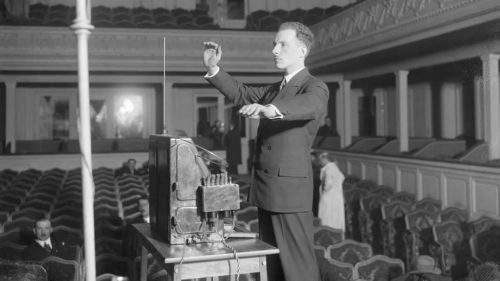 Popular culture’s decades-long love affair with the theremin began in 1920, when the Soviet physicist and radio engineer León Theremin invented the instrument by accident. At the time, Theremin was working on developing proximity sensors, which would be able to detect an approaching object using sound waves. When Theremin found that the interruption of the electromagnetic field with his hands created pitch, he unwittingly stumbled upon the “first successful electronic instrument.” The instrument was patented in 1928 and RCA Victor already had their commercial model ready for the market in 1929.

RCA Victor especially geared their campaigns towards middle and upper-class white women. Kelly Hiser details how the theremin became a gendered instrument in the 1930s and 40s in her article, “‘Splendid Sonority and Vivid Expressiveness’: The Theremin Before Sci-Fi.” Due to gender roles of the time, RCA Victor marketed the theremin to middle and upper-class white women as a domestic musical instrument. The theremin itself even had furniture-like qualities, designed to look pleasant in the home as well, “hiding its working parts – oscillators, vacuum tubes, and circuit board – in a polished wooden cabinet.” Also part of the campaign were NBC radio programs that featured thereminists performing classical and popular works of the day, and theremin tours. 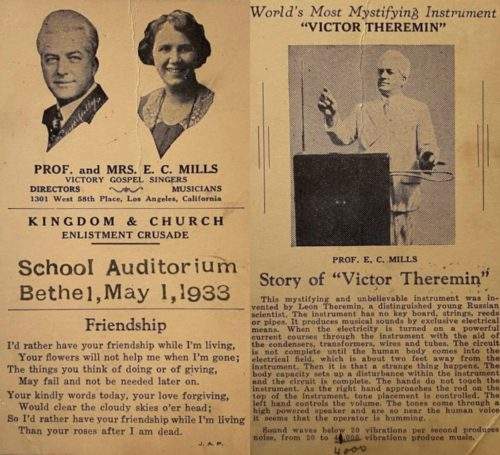 Another little-known use for theremins during these early decades was in church settings. Alex York shares this handbill from the early 1930s for a theremin recital by Reverend E.C. Mills and his wife, perhaps one of the first touring thereminist couples. He writes, “A handbill for a show that my great grandpa Don Fronsoe attended in Bethel, OH in May of 1933. This is Reverend E.C. Mills, and his wife – their performances have not been documented well by any press so this handbill alone is insane. It’s said that the use of the ‘Victor Theremin’ would have been utilized for ‘spiritual & otherworldly’ sound effects during sermons, as well as used as an instrument during some hymns. Some of the earliest live electronic music performances in the United States.”

The marketing efforts by RCA Victor and theremin tours turned out to be for nought, as the theremin did not take off and become as ubiquitous in the middle-class home as a piano. The main point of RCA Victor’s campaign was that anyone could play the theremin. In the end however, this proved to be false. It takes an immense amount of control to be able to create tonal melodies on the theremin. Furthermore, RCA Victor started selling commercial theremins in 1929 for $230 (today’s equivalent of $3,300), right on the cusp of The Great Depression in the United States. 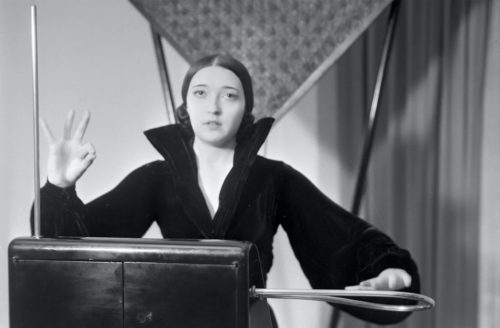 Like RCA Victor’s intended demographic, thereminists were often women. Coming out of this early era of theremin performance was perhaps the most prominent thereminist in the instrument’s history, Clara Rockmore. Rockmore helped popularize the theremin with audiences, making an electronic instrument appear more accessible to the public. She developed a distinct style of playing that included an intricate method of using her fingers as well the movement of her hands in performance. Rockmore had a deep fondness for the instrument and advocated for theremin instruction. In an interview with Robert Moog in 1977, she said, “There is a certain terrific freedom. You feel like a conductor in front of an orchestra. There is no instrument between you and the music. Sure, there is a theremin standing there, but you’re in the electromagnetic field. Every movement you make is a perfect synchronization of sound and motion.”

Rockmore often opted for performing classical music favorites on the instrument, ultimately with the hope of legitimizing the instrument as something of serious study, not simply a technological wonder. Rockmore preferred to perform melodic music on theremin versus experiment with sound on the instrument.

On the other hand, composer John Cage was not fond of thereminists, or at least what they represented within electronic music. In a 1937 talk later published in his book Silence, Cage said, “When Theremin provided an instrument with genuinely new possibilities, thereminists did their utmost to make the instrument sound like some old instrument, giving it a sickeningly sweet vibrato, and performing upon it, with difficulty, masterpieces from the past. Although the instrument is capable of a wide variety of sound qualities…Thereminists act as censors, giving the public those sounds they think the public will like. We are shielded from new sound experiences.” At this time, the theremin would not be missing entirely from experimental and avant-garde music, with composers such as Edgard Varèse including theremin in his works such as Ecuatorial (1934).

However, Cage hoped for a culture surrounding the theremin that would expand its sound realm and possibilities. Rockmore enjoyed performing classic works on the theremin, and found doing so helped legitimize the theremin with the public. Whether you agree with Cage or Rockmore, ultimately the theremin has enjoyed a life of extreme sound possibilities and traditional performance approaches. In the 1940s and 50s, the theremin’s sound world began to expand through the film industry, ultimately arriving at sonic connotations that it would become most known for – the strange, weird, spooky, and extraterrestrial. 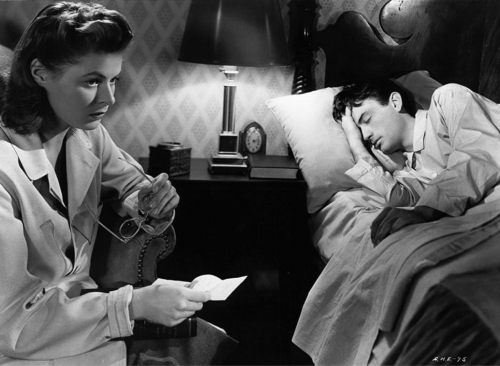 As the 40s and 50s progressed, the theremin became a popular choice for film composers scoring science fiction and horror films. From campy B-movies to cinematic masterpieces, the theremin became a signifier for strange experiences and otherworldly encounters. One of the first notable uses of the theremin in film music was in Miklós Rózsa’s score for Alfred Hitchcock’s Spellbound (1945). Starring Ingrid Bergman and Gregory Peck, the film follows the romance between a psychoanalyst (Bergman) and the new head of the hospital (Peck), who may actually be a murderer. The theremin takes on an ambiguous quality in the score, with moments where its presence as an electronic instrument is clear, but other times when it blends so seamlessly with the acoustic string instruments in the orchestra that its nature is enigmatic. Ultimately, this quality reflects Peck’s character, whose identity as a murderer is unclear.

A few years later, the theremin’s association with aliens would become explicit through Bernard Herrmann’s score for The Day the Earth Stood Still (1951), directed by Robert Wise. The film tells the story of a visitation on Earth by an alien, Klaatu and robot named Gort, who arrive to deliver an important message to humans in the midst of the Cold War’s nuclear arms race. The theremin takes center stage during the scene when Klaatu and Gort first land on Earth, encountering military and civilians. The warbling, slippery sound of the theremin adds to the fear and mystique as Klaatu and Gort make their descents from their spaceship.

After the deep impression science fiction and horror films made on the public’s perception of the theremin, its relationship with space and otherworldliness never really went away. With the development of genres such as psychedelic and progressive rock in the late 1960s and early 1970s, the theremin found a new home in the innovations of rock at the time. A commonly cited example of the theremin in rock is The Beach Boys’ “Good Vibrations,” the instrument fitting with the song’s title. However the instrument on the song is actually an electro-theremin, an instrument invented to imitate the sound of a theremin, but is actually a sine wave generator controlled by a slider.

Despite this misconception, there are still many examples of theremin use in rock. Notably, Jimmy Page played a theremin during live performances of “Whole Lotta Love” with Led Zeppelin, manipulating the instrument to create a spacey effect and interact with Robert Plant’s vocals.

The theremin also made appearances on The Rolling Stones’ Their Satanic Majesties Request (1967), Brainticket’s Celestial Ocean (1973), and many others, with a forum on Prog Archives dedicated to figuring out where the instrument pops up in progressive rock. The theremin maintains a presence outside of rock as well, such as on Erykah Badu’s “Incense,” and her use of it in live performance. She creates not only a series of sound effects with it, but intertwines it with the rhythm section to extend its properties beyond simply melody or effect.

Today, the theremin still finds its place in a variety of musical contexts. Thereminist Carolina Eyck has an approach akin to Clara Rockmore’s, performing melodic works from classical, popular, and new contemporary repertory. She’s also developed methods for playing the theremin, such as her book The Art of Playing the Theremin (2006). Rusalka, the harsh noise project of Kate Rissiek, expands the possibilities of the theremin’s sound world through noise, along the lines of John Cage’s hopes for the instrument.

Since 1920, the theremin has captured the imaginations of popular culture in some of the most varied ways for one instrument. And as long as it continues to inspire awe in its players and listeners, its significant role in the world of electronic instruments will continue as well.

We have a copy of Clara Rockmore’s Theremin on new vinyl! Also explore the art rock/krautrock/prog/psych and modern composition/musique concrète/electronic sections of our site. You never know when you may hear a theremin appear.

Kevin Gordon, “The Story Behind That Really Creepy Sound In The Film Score from The Day The Earth Stood Still,” WRTI (2020)
Kelly Hiser, “‘Splendid Sonority and Vivid Expressiveness’: The Theremin Before Sci-Fi,” New Music Box (2019)
Nora McGreevy, “The Soviet Spy Who Invented the First Major Electronic Instrument,” Smithsonian Magazine (2020)
Norman Miller, “The Theremin: The Strangest Instrument Ever Invented?,” BBC Culture (2020)
Bob Moog, “In Clara’s Words,” on Theremin Vox (original interview 1977)
“Not A Radio…Not A Phonograph…Not Like Anything You Have Ever Heard…,” Pavek Museum
“The Theremin,” Cornell University (cool scans of theremin paraphernalia)
“The Theremin at 100: A Scrapbook of Thoughts,” Moog Music (2020)