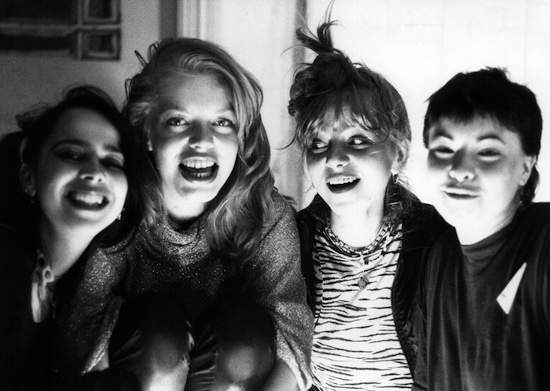 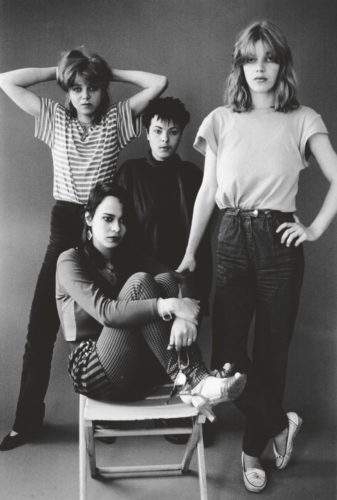 Carambolage, a French word for “clash” or “collision,” was the moniker of one of the first German new wave bands with solely female members. The name was fitting for the band, as their musical style frequently brought together disparate influences and stood on its own compared to their Neue Deutsche Welle (New German Wave) counterparts. This year, Tapete Records reissued Carambolage’s first two records on physical formats for the first time since the original pressings, and physically released their final record, Bon Voyage for the first time ever.

Formed in 1979, Carambolage came out of the anticapitalist and anarchic rock group Ton Steine Scherben, which drummer Britta Neander had been a part of since 1974. The original Carambolage lineup also included Elfie-Esther Steitz on vocals and guitar and Angie Olbrich on bass and organ. Carambolage set out with an experimental spirit to create a unique sound from their peers, many of whom were involved in the NDW movement, a German style of post-punk and new wave characterized by the influence and use of electronics. Some cite NDW as one of the musical developments to come out of krautrock from the 1970s, and the influence of British punk is also undeniable. Carambolage’s lack of electronics was striking compared to the surrounding figures in NDW, and the band members even created their own term to describe their music: “North Frisian Wave,” citing where they came from. 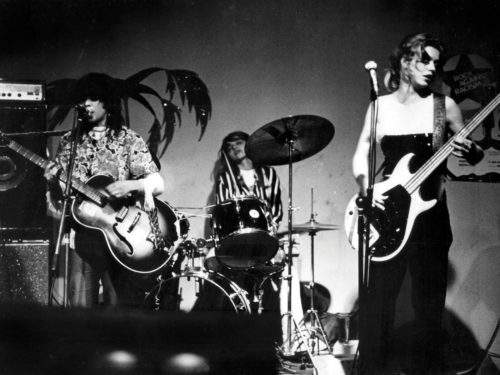 Carambolage’s DIY spirit carried over into practice as well, especially when they built their own rehearsal space in an old grain silo, making up the inside with carpet and cardboard. After getting a few demos in hand and playing a successful gig at the popular club SO36 in Kreuzberg, Carambolage set out on tour in West Germany, Austria, and Italy. They were swiftly signed and began work on their first LP in 1980.

This first record is perhaps their most idiosyncratic, with a sound rooted in post-punk, but surrounded by cabaret-inflected vocals by Steitz and subtle goth influences in the dark guitar and bass timbres. Their cheeky lyrics reflect the cadence of the German language more than English, and exhibit an early form of “lipstick feminism,” a thread of third-wave feminism which championed the power behind traditional indicators of femininity, embraced sexuality, and sought to reclaim derogatory terms used against women.

For the tour supporting Carambolage’s self-titled debut, Janett Lemmen stepped in for Olbrich, who was pregnant at the time. Upon heading into the studio to record their second album, Lemmen was added to the band’s lineup on saxophone. This record, Eilzustellung-Exprès, first released in 1982, features quite a shift in sound from their first. Carambolage moves into a power pop direction, with brighter, jangly guitars and girl-group influenced vocals. This change doesn’t come off as commercial in nature however, as Steitz’s vocals still carry the same urgency and ferocity, and the song structures are as non-traditional as before. Instead, Eilzustellung-Exprès showed the band experimenting with new sounds and ultimately creating sonically cohesive results.

Unfortunately, the process of creating their third album, Bon Voyage, brought Carambolage to a close. Bon Voyage continues in the bright style of Eilzustellung-Exprès, but shows the band exploring musical characteristics of new wave and synth pop. Songs such as “Küss mich” reflect this with catchy melodies and drums that emulate the driving patterns of new wave drum machines. During the recording process of Bon Voyage, the members of Carambolage became strained by creative differences, torn between returning to the DIY approach of their early work or moving forward with more smooth production. When Bon Voyage was rejected by CBS, the band parted ways. Bon Voyage didn’t get its first official release until 2019 when it was digitally released by Fuego.

Now, all of Carambolage’s records are available via Tapete Records, and we currently have Carambolage and Bon Voyage in stock here at the shop. Grab one of these to experience their unique post-punk and new wave that ultimately doesn’t easily fit into either category, and if necessary, make sure to pick up a German to English dictionary to hear their feminist punk lyrics that deserve a seat at the table with the likes of X-Ray Spex, The Slits, and Kleenex.