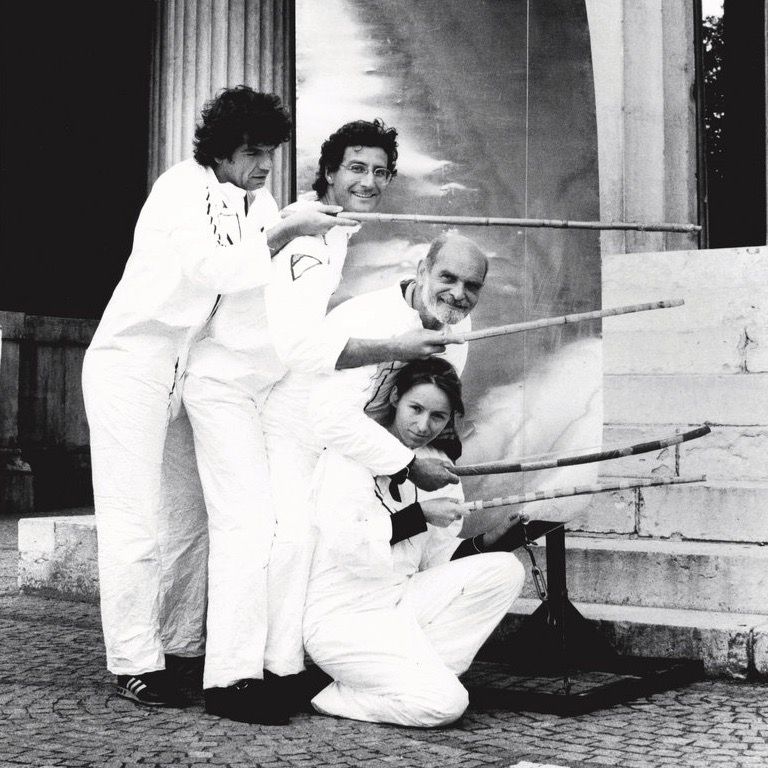 “Ancient and Futuristic”: Robert Rutman and the US Steel Cello Ensemble

While the word “cello” may bring to mind a wooden instrument played by influential figures such as Yo-Yo Ma, the steel cello created by German artist and composer Robert Rutman couldn’t be more different than the instrument from which it earns its namesake. The steel cello and bow chimes, dubbed as “American Industrial folk instruments” by their creator, emit an eerie, haunting drone from their construction of metal sheets and rods. Rutman formed the US Steel Cello Ensemble in 1975 to perform musical works on these unique instruments, and Putojefe Records just reissued their essential 1989 recording, Noise in the Library, on LP again after their initial run in 2018. For this week’s blog, I dive into Rutman’s history, tracing how the US Steel Cello Ensemble came to be. 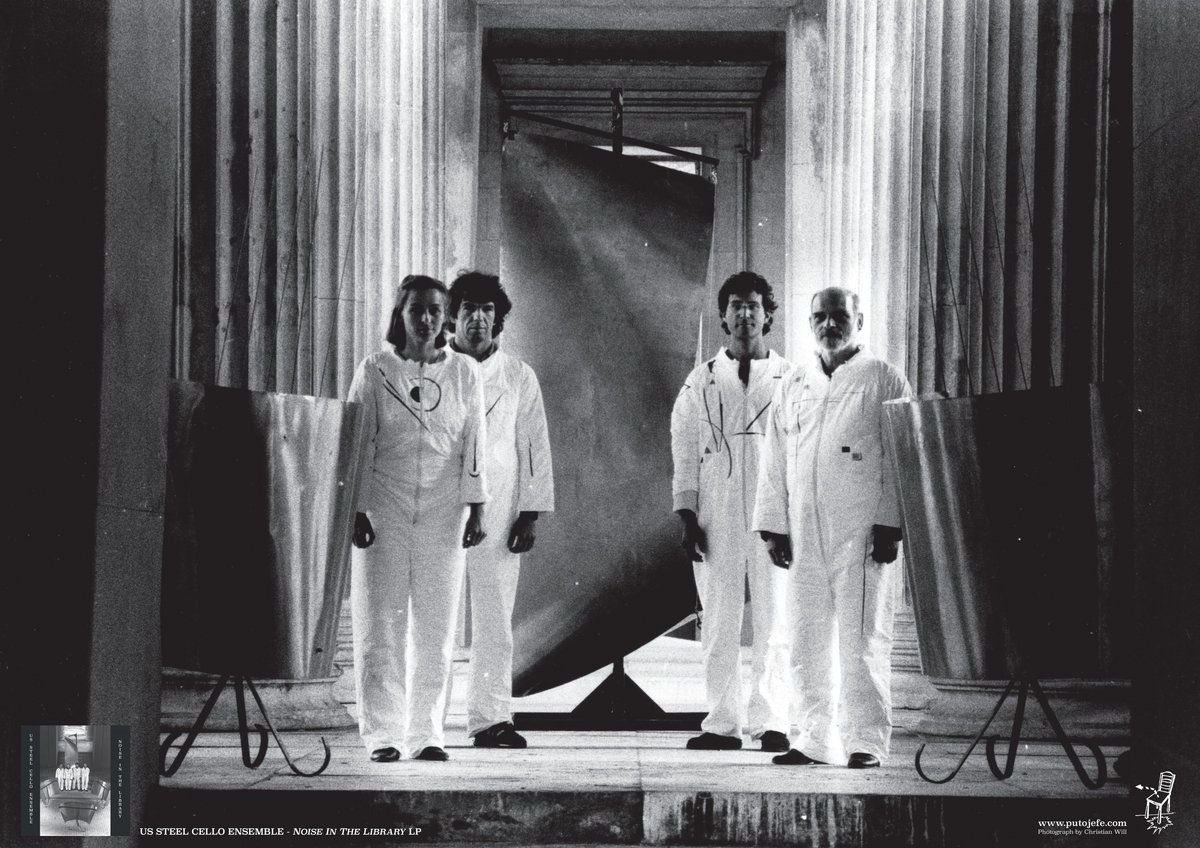 Robert Rutman was born in Berlin in 1931, him and his Jewish mother fleeing Nazi Germany when he was a young boy, first to Poland then to England, where he remained throughout childhood. In 1950, Rutman moved to the United States, beginning his art studies in the mid-fifties in New York City. He founded a gallery in the city in 1962 called, “A Fly Can’t Bird But A Bird Can Fly,” which hosted multimedia art events that brought together art, music, poetry, and theater. It was at this gallery that the seeds of Rutman’s future musical ideas were planted.

Rutman had many collaborators and friends at the gallery, including Beat poet Philip Lamantia and sculptor-musician Constance Demby. Through working with Demby, Rutman began to develop his instruments. In 1967, the gallery put on many events that involved artists performing sound art with various sheets of metal they found, which inspired the pair to explore the concept further. A piece titled Space Mass which Rutman performed at the gallery demonstrated an early form of what would come to be his steel cello.

In the late sixties, Rutman moved to Maine to open a gallery, and although the gallery only lasted fours, his ideas flourished during this brief period. He put the finishing touches on his “American Industrial folk instruments.” Decades later, he would describe their sound as “creat[ing] the environment that’s both ancient and futuristic at the same time. It spans this whole sense of space and future and past. That’s what’s inherent in the sound of the instrument.” The two instruments Rutman developed were the steel cello and bow chime, both made of sheets of metal and rods, the metal acting as the resonating body of the instrument and the rods as the manipulated parts. The steel cello attached an eight-foot sheet of metal vertically on the rod, whereas the bow chime hung a six-foot sheet of metal onto a perpendicular iron rod. The instruments were played by bowing the rods with fishing line or pinching the rods to bring out their overtones.

In order to get his instruments out in public and performed on, Rutman formed the Central Maine Power Music Company in 1970, whose members included Demby for a while. Along with the steel cello and bow chimes, the ensemble used circular saw blades as percussive elements. However, Rutman’s handmade instruments were soon sidelined in the ensemble by more traditional instruments, and Rutman set out to form a group that relied on his instruments solely. Enter the US Steel Cello Ensemble, founded in 1975.

The US Steel Cello Ensemble performed in an array of venues, especially science museums and art galleries. In 1978, the instruments eventually caught the attention of jazz legend Sun Ra. After ensemble member Warren Senders recommended the instruments to Sun Ra, convinced their properties would lend themselves to his cosmic vision, Sun Ra incorporated the instruments into his residency at the Modern Theater in Boston. However Senders noted that Sun Ra had trouble making a sound on the instruments, and that they unfortunately did not create sound to the fullest of their potential during his performances.

Although hearing the US Steel Cello Ensemble live was a specific experience in and of itself, Rutman wanted to document the group on recording and founded his own record label, Rutdog, to release the ensemble’s music. The first release on Rutdog was Bitter Suites, recorded at art galleries in New York and Boston in 1979. The atmosphere is nightmarish, the instruments wailing in a reverberating space, from moaning lows to screeching highs. Bitter Suites feels like the perfect music to accompany apocalyptic aftermath.

The US Steel Cello Ensemble’s sound was used as accompaniment throughout the years, such as for a 1980 Peter Sellars production of Shakespeare’s King Lear at Harvard University and a 1986-87 Robert Wilson production of the Greek tragedy Alcestis, the latter in collaboration with Laurie Anderson. As Rutman said, the steel cello and bow chimes evoked something “ancient and futuristic.”

The journey to their album Noise in the Library would take Rutman back to Europe first. Rutman and ensemble member Daniel Orlansky toured Europe in the late eighties, and while abroad incorporated two German musicians, Alexander Dorsch and Stephanie Wolff into the group. Wolff’s only previous credits to Noise in the Library, albeit a substantial one, was as a guest vocalist with the spaced-out prog greats, Brainticket. Dorsch contributed a double-stringed steel cello to the ensemble and Wolff brought in overtone singing to complement Rutman’s own vocals which were inspired by Tibetan Buddhist chanting. The results of this collaboration was captured at the Passionkirche in Berlin in May 1989, released as Noise in the Library that same year.

Noise in the Library continues the vision heard on Bitter Suites, although the presence of Wolff’s and Rutman’s vocals adds another hypnotizing layer to the droning texture. Man and metal merge into one on tracks such as “Obertongesang Mit Klingender Skulptur.” The title track introduces brighter tones, incorporating a different approach to playing the rods. And the “Bow Chime Quartet” is stark and melancholy, a more subdued and aching production compared to the others. Between Bitter Suites and Noise in the Library, the US Steel Cello Ensemble crafted deeply gorgeous and terrifying music through sounds unlike any others. 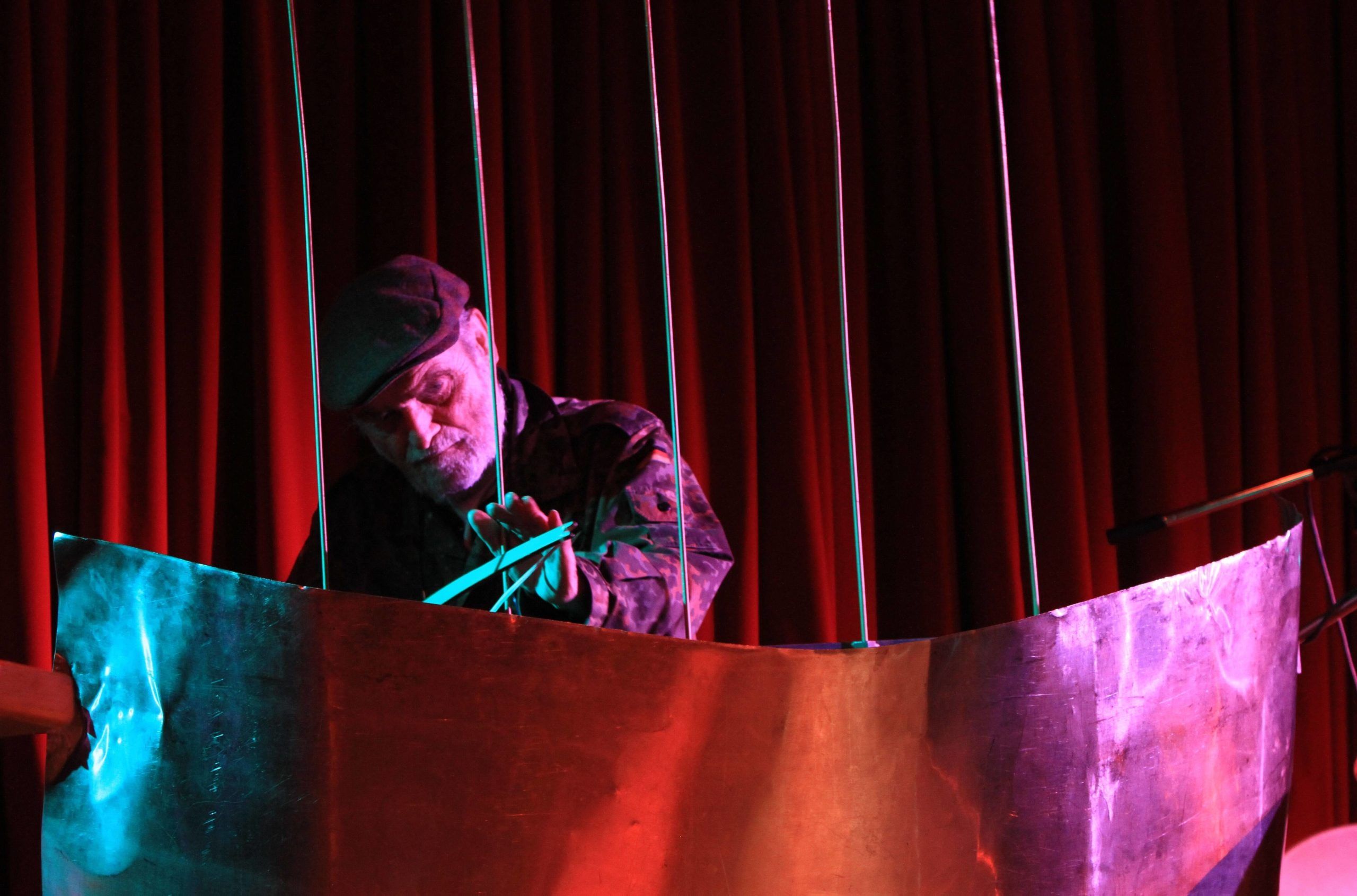 Rutman’s return to Berlin inspired him, and he moved back to the city permanently in 1990, where he remained a fixture of the local arts scene until his death at ninety-years-old last year. In 1998, Rutman had the opportunity to tour with the industrial giants, Einstürzende Neubauten, and The New York Times noted how Einstürzende Neubauten “had shown what it sounds like to assault metal, [while] Mr. Rutman chose to caress it.” The statement illustrates the breadth of industrial sound, how it can be manifested through striking, bowing, crashing, any which way a person can interact with metal. Robert Rutman devoted much of his life to exploring the depths of how one can interact with the elements, his conception of “American Industrial folk” as a byproduct of Western society, equally organic and manmade.

Along with Noise in the Library, we have multiple Einstürzende Neubauten records to check out, as well as whole sections dedicated to modern composition and industrial for further exploration.

US Steel Cello Ensemble – Noise In The Library LP – $22