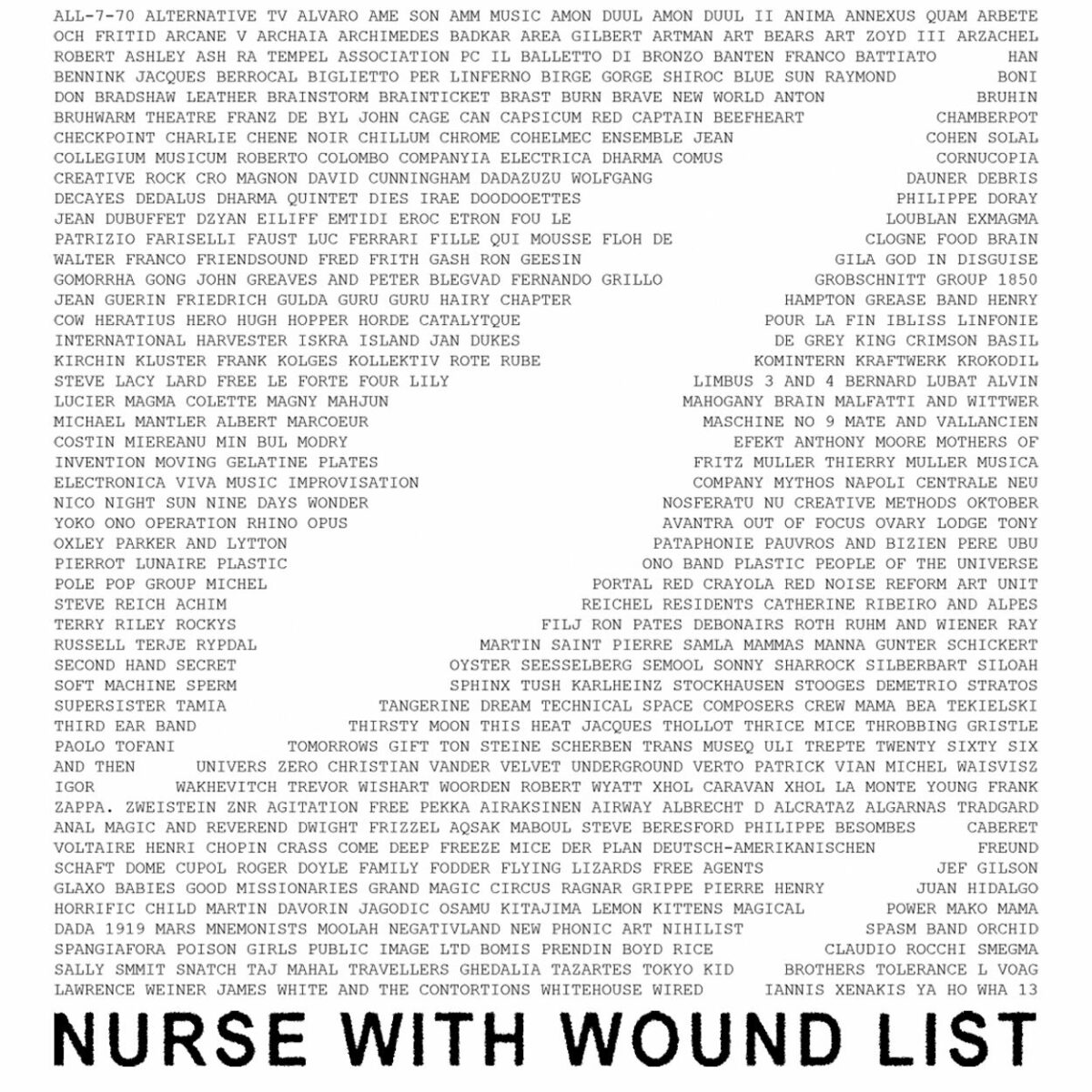 For this edition of Off The Wall, where I typically discuss a few items from our specialty items wall, I’m taking a slightly different approach. Currently, Torn Light is developing featured shops here on the website to highlight various record labels and topics in music, books, and movies. One of our new featured shops is our Nurse With Wound List shop, which compiles records by any of the artists on the Nurse With Wound List that we have in stock, whether as a brand new copy or a rare specialty item. After diving into a bit of history about the Nurse With Wound List, I’m highlighting three records we have available by artists from the list. 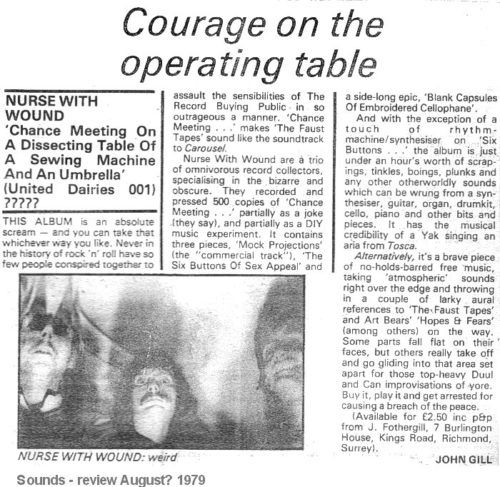 In 1979, the seminal experimental group Nurse With Wound released their first album, Chance Meeting On A Dissecting Table Of A Sewing Machine And An Umbrella. At this time, NWW was made up of Steven Stapleton, John Fothergill, and Herman Pathak. With this debut release, the three members included an enigmatic list of artist names. Outside of alphabetizing the list, the names were presented in a chaotic fashion, names like Alvin Lucier split onto two different lines on opposite sides of the design.

The list compiled a total of 291 artists by the time it was expanded in 1980, citing the major influences and inspirations for the members of NWW. The artists spanned many genres – free improvisation, musique concrète, krautrock, prog, experimental electronics, post-punk – and ranged from well-known favorites like The Velvet Underground to names people were convinced were made-up. Before the founding members of NWW recorded their first album, they spent years traveling across Europe collecting musical oddities, unknowingly developing the NWW List before the band was even a twinkle in their eyes. The band itself was created on a whim after Stapleton befriended a few recording engineers, who then asked if he had a band to record (he didn’t), and Stapleton said yes. But by that point, Stapleton, Fothergill, and Pathak had a robust collection of influences to propel them into the recording studio to carve their own path.

The Nurse With Wound List has captivated record collectors and fans of underground music for decades, still maintaining a significant place in the curation of avant-garde music from the sixties and seventies. Christopher R. Weingarten wrote for Stereogum that the list’s “size, scope, and whimsically curatorial lean make it absolutely useless as a ‘canon’” of underground music. I tend to lean towards the opposite opinion: I think the NWW List helped cement various figures into the history of underground music, especially those who were less well-known before the list was made. While many more artists could certainly deserve a place on the list if it was updated today, the list provides a concrete spine for where to begin with underground music, a common ground to build from and acknowledge historically.

Below I take a look at three records we have by artists on the NWW List – Pierre Henry, The Nihilist Spasm Band, and Ash Ra Tempel (Manuel Göttsching) – who I think capture the variety of influences on NWW’s sound.

One of the pioneers of the musique concrète genre, French composer Pierre Henry, along with the radio engineer Pierre Schaeffer, completely changed the way we think about the boundary between sound and music. Their 1950 composition Symphonie Pour Un Homme Seul blurred that distinction, creating a piece that was sound as music. Symphonie Pour Un Homme Seul serves as a document of the innovative tape techniques they developed, including sampling, looping, and splicing. Throughout the piece, snippets of footsteps, room noise, speech manipulated by speed or played in reverse, and many more sources of sound provided the musical structure and timbral effects of the work. The influence of musique concrète on NWW is profound, and I can certainly hear the connection between Symphonie Pour Un Homme Seul and NWW tracks such as their debut’s “Blank Capsules Of Embroidered Cellophane” which sparsely slinks through a variety of sounds, and Homotopy To Marie’s “I Cannot Feel You As The Dogs Are Laughing And I Am Blind,” whose opening crunches provide the sonic foundation for haunting voices to creep in.

Led by guitarist Manuel Göttsching, Ash Ra Tempel stands as an essential group to develop out of seventies krautrock. Formed out of the ashes of Conrad Schnitzler’s band Eruption (which had come from Tangerine Dream and Kluster, who are both also on the NWW list), Göttsching, Klaus Schulze, and Hartmut Enke began Ash Ra Tempel to continue the tradition of kosmiche musik. While Ash Ra Tempel often foregrounded the efforts of Göttsching, 1975’s Inventions for Electric Guitar worked as a hinge between Ash Ra Tempel and Göttsching’s solo work. On Inventions, Göttsching performs guitar works that expand the instrument’s capabilities as a solo instrument. The guitar takes on a driving, rhythmic quality that is synth-like as Göttsching plays through gradually changing small motifs in tracks like “Echo Waves.” Prog and krautrock has a heavy presence on the NWW List, and from the meandering guitar soloing of “Two Mock Projections” to the teasing out of piano motifs on the second half of Spiral Insana, the krautrock approach to soloing, improvising, and composing motifs and musical fragments is baked into NWW’s work.

The Canadian noise group the Nihilist Spasm Band began in 1965, pushing the edges of free improvisation tradition until they bent, then broke wide open completely. Founded by Archie Leitch, Greg Curnoe, Hugh McIntyre, John Clement, John Boyle, Bill Exley, Murray Favro, and Art Pratten (the latter five are still active members), the band performed on homemade instruments with a complete disregard for conventions of tempo, pitch, and instrumental range. They began meeting regularly on Monday nights in 1966 and continued on from there, recording their first LP in 1968, No Record. Their record, Vol. 2 captures their unexpected synergy during a live performance from 1978. The opening track “No Canada” perfectly encapsulates their carefree nature and surprising ability to direct musical structure through chaos. Recalling NWW’s first recording experience, which documented their use of hastily acquired instruments and spontaneous creation of music, their admiration for how The Nihilist Spasm Band paved the way is clear. The sleeve notes for their debut record were even dedicated to the group.

Available from Nurse With Wound at Torn Light Records:

“Laughing Too Much”: The Whimsical, Heartfelt Folk of Norma Tanega